What are the spices?

It’s hard to imagine what cooking would be like without the unique flavors provided by different spices and seasonings. For centuries, spices and seasonings were an integral part of many of the world’s great cuisines. At one time, only royalty and the wealthy could Buy a delicacy like cinnamon. Today all supermarkets and most small grocery stores have well-stocked spice racks that offer a great selection of different herbs, spices and spices.[1]

The term “spices and spices” is often used widely to include all kinds. Spices and spices come from the bark, roots, leaves, stems, buds, seeds, or fruits of aromatic plants and trees that usually grow only in tropical countries; Such as pepper, cardamom, cloves, nutmeg, cinnamon, ginger, saffron, and turmeric.[1]

The components of the Saudi mixed spices

Here are the top 12 essential spices and seasonings that should be in your kitchen seasoning cupboard:[2]

It is an indispensable spice in baking and cooking. Cinnamon is most popular for people in sweet recipes, but it is also common in savory dishes to add depth of flavor and dimension. It can be used in desserts, breads, drinks, stews, curries and sauces.

Similar to the paprika condiment, chili adds more heat to a myriad of dishes. Made from chili peppers, this versatile spice is often used in hot sauces and is popular in Mexican, Cajun, Southern and Indian cuisines.

In fact, cumin is the dried fruit of a plant of the parsley family. Cumin comes in ground-seed form. This aromatic spice is frequently used in Middle Eastern cuisine as well as in Asia and North Africa.

Onion powder makes the menu for the same reason garlic powder does. It’s great for when you need it or when absolutely necessary, and it’s worth noting that onion powder is used in spice blends, spices, and vinegar.

This type of light spice adds a smoky aroma to seafood, vegetables and eggs dishes as well, although this type of spice may not be essential in every kitchen, but it adds a distinctive flavor to foods greatly, as many restaurants are keen to add this The kind of seasoning to the smoked dishes you prepare.

A great shortcut in the kitchen, chili powder is a spice blend made with chili peppers, garlic, cumin, coriander, oregano, and cloves. Chili powder is used especially in Mexican and Southwestern cuisine.

An essential and quintessential spice in the kitchen, ginger is used in many delicacies, and is great in spicy breads, curries, meat dishes, and soups. 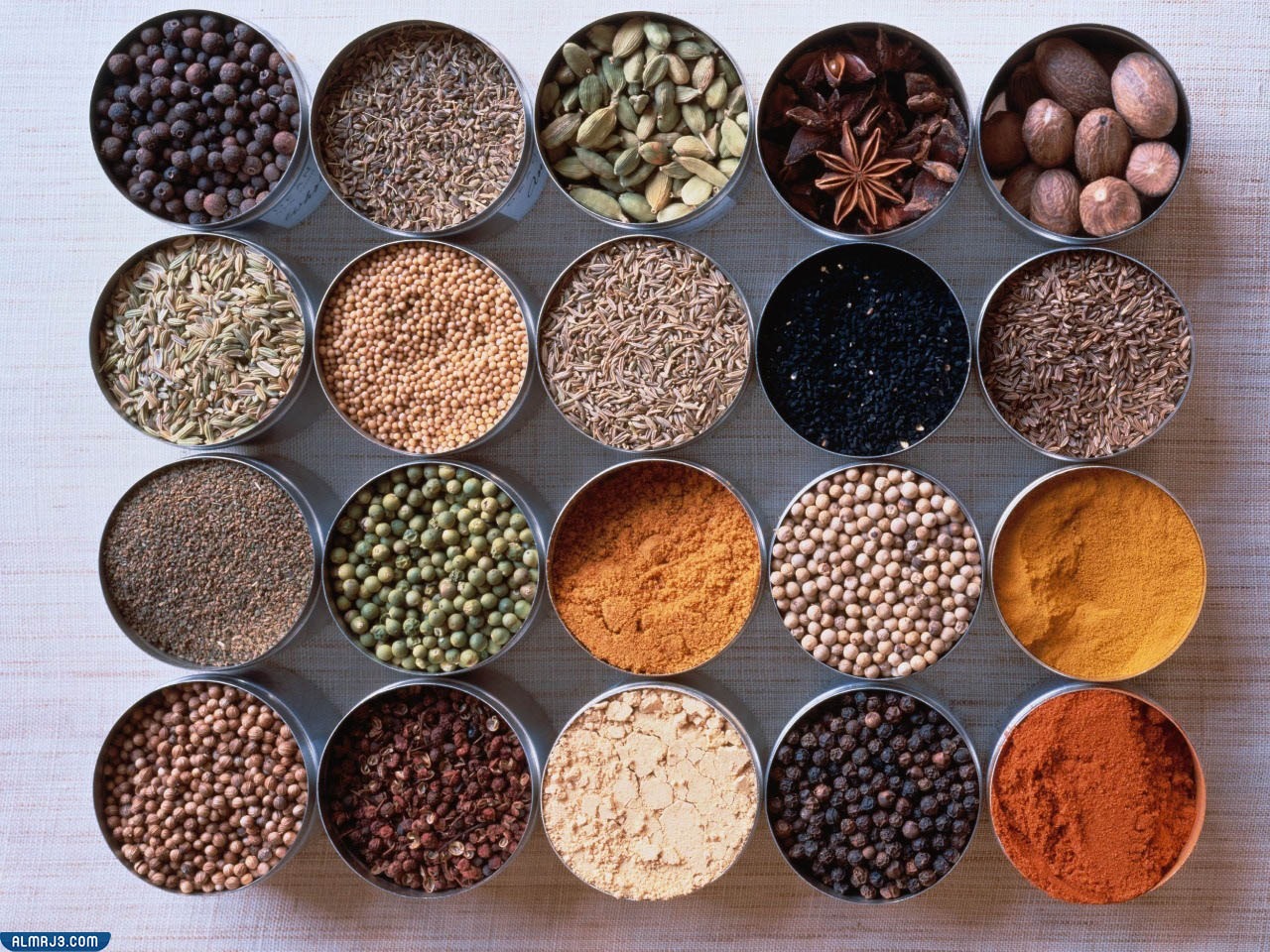 Here are some basic dried herbs that should be included in the list of dried herbs:[1] 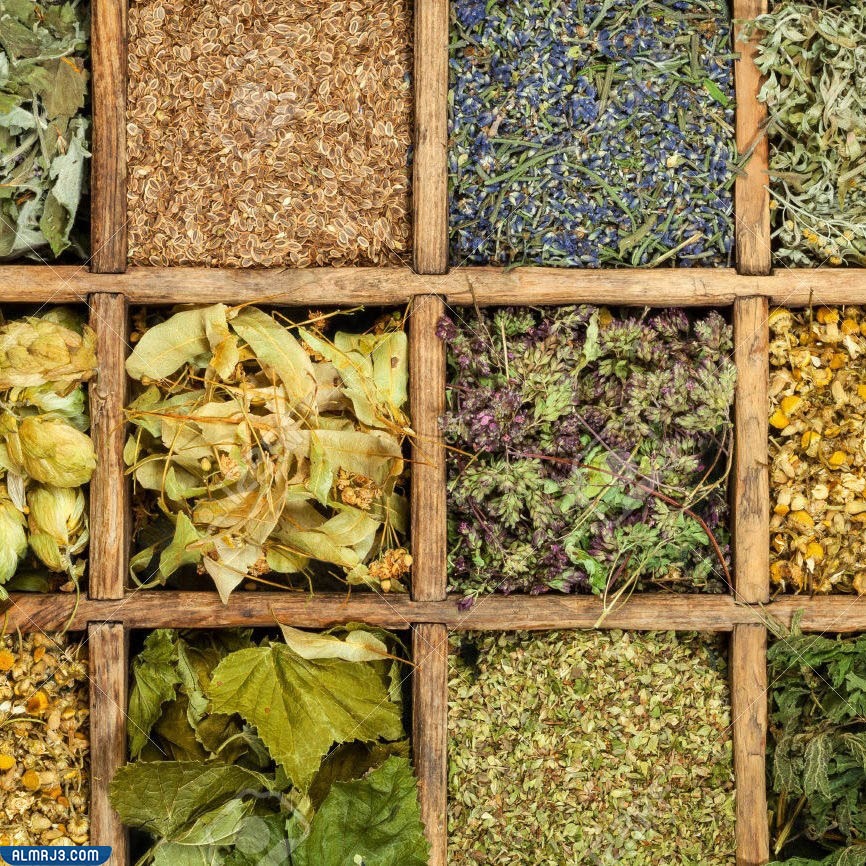 Kitchen spices for the bride

The following is a list of the most important types of spices and spices for any girl who is about to get married:[3]

Smoked spices are in vogue nowadays, so some delicious smoked sea salt can be included in the list of spices. Another popular spice is Vietnamese cinnamon, which is appreciated by gourmet chefs and believed by many to be the best cinnamon in the world.

Names of spices and seasonings with pictures

A mixture of spices for all types of food

It is possible to mix many different types of spices to obtain a mixture that is used in various foods. As for the quantity, it depends on the quantity that will be prepared. These spices include:[4]

How to store spices and seasonings

Placing a spice pot over the stove may be appropriate, but because herbs and spices deteriorate when exposed to heat, light, and moisture, it’s not the ideal place to keep them. Means that produce should be kept away from oven, stove and heat of the sun, temperature fluctuations can cause condensation and eventually mold, if you store condiments in the freezer or refrigerator, return them immediately after use.[5]

A good storage system keeps herbs and spices dry and in the dark too Amber glass jars with airtight lids are perfect You can also keep them in a cupboard or drawer, cover the jars with large opaque labels or use a curtain to cover them when not in use In short they can be stored Herbs and spices in clean, airtight containers, away from heat and light, and handle with care.[5]

Shelf life of spices and seasonings

How to tell if your spice is past its prime The shelf life of every herb and spice varies, and all ages, even under the best of conditions, must check herbs and spices, and those to be purchased; To know that they look fresh, not faded, and have a distinct aromatic smell, and should be replaced as soon as spoilage is detected, the shelf life of herbs and spices varies according to the shape and part of the plant as well, those that have been cut or crushed are exposed to more air space and thus lose their flavor more quickly than whole herbs and spices, on For example, here are some tips:[5]

Names of spices and seasonings with pictures

What are the seven spices?

Spices and seasonings are in the secret key to every cooking, as each of them has a distinct taste that adds flavor to dishes, especially if they are used correctly, and there are many Kitchen essentials and seasoningsIn addition to dried herbs, which can be introduced as basic ingredients in the dish that will be prepared.